Heart of the home - the kitchen,

Heart of the home - the kitchen

This is a story for the life lesons and mostly for "when there's a will, there's a way"! For the heart of the Old Nest or the Old Cowshed.

When I got the house, one of the jewels I found was the Old Cowshed. I got inside, it was dark and cold, full with spiderwebs, I stumbled in dried old cow manure, I could bearly get inside by all of the trash and stuff left by the past residents.

But! The walls were perfectly right, the beams on the ceiling were perfect, very thick oak beams - somehow I ignored the rest of the view. For me this was not simply an cowshed, this was the future winter dining room and kitchen in the house. I imagined very clearly were will be the counter, the appliences, the bar, where and how the tables will be placed. I wanted also a fireplace, but there was no chimney. The chimney was not supposed to be here. Where and how the pipes for clean and dirty water will be placed? The electricity plugs?
I walked around the manure with latern and tought, often speaking to myself. I say very often that "Thinking is 90% of the work."

I tried to find workers for this project, but everyone who came to see what the work will be just left. We didn't even get to the payment point. They tought that I am crazy, that nothing was going to happen. I couldn't find any workers. Finally I managed to convince one local - Dimo Chernomorski to work on the electricity system. He and Grandma Anche were the only ones who believed in my crazy ideas.

So, we done the electricity, but the hard work was infront of us. The cowshed is a 35 sq.m. room, with high ceiling, on the extention were build with bricks the feeding points for the cows. I had to remove them, to throw away the stones, a lot of stones, to clear out all the manure, to fix the floor and make it flat, to put the pipes and so on. Then I decided not to throw away all of the stones, but to use them to make the floor flat and on the same level on all sides. At that time Grandma Anche was helping me with household stuff around. Back then she was 70 years old, but strong as bull (as we say here). I was removing the rocks, then she rolled them on spot.

I remember that these days I felt doomed to stay in this tomb forever. Under the sounds of Z-Rock radio me and Grandma Anche worked together, sometimes she was faster than me! I continued looking for workers, but no success. I was starting to work right after the morning coffee, short lunch break, short dinner, then the work continued by the middle of the night, again under the sounds of Z-rock radio. I used gloves, but nevermind, my hands were black of dirt and I couldn't clean them for days.

It became time for the concrete. I put an old linoleum on the floor and got all the materials needed inside. Tons of sand, few dozens of cement, I could't see the end of this! Then Grandma Anche said: "I know how to do concrete..." So we started - she was mixing, I was carrying and spreading - all by hand. But it was slow. Then I went to Haskovo to get a concrete mixer. Ah, this was a totaly different thing. And we continued. Then it was ready step by step.

Then I learned to row tiles. I called this worker who was specialized in rowing tiles and we started from both sides of the room, but at some point he said "go, my brother, I will pass you the materials".

Now, when we get together in this old cowshed, next to the fireplace and we say Cheers I remember these days with a smile. It warms my heart to see this dining room full with smiles and happines. God Bless you people, Grandma Anche too, because not so many people like her left on this Earth. 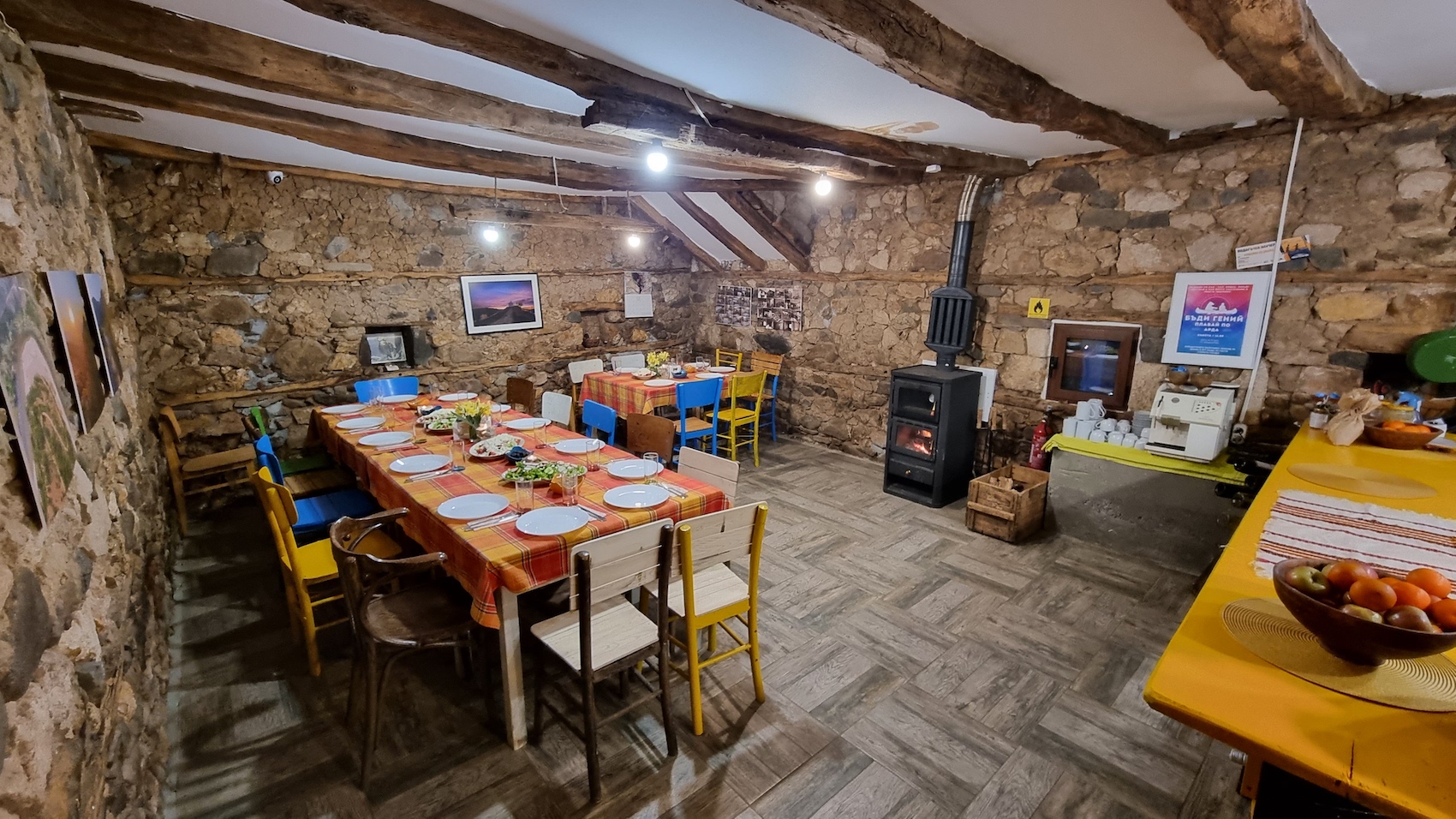